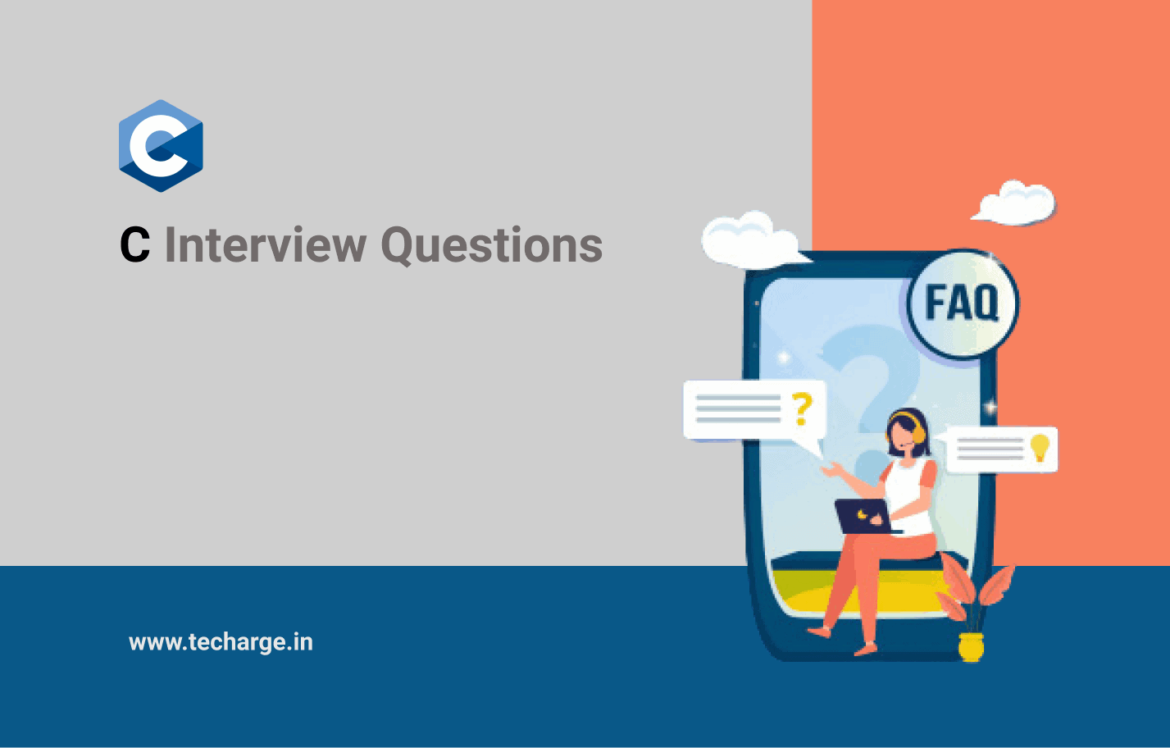 In this article you we will learn C Interview Questions that are mostly frequently asked in the interview.

In a passage of text, individual words and punctuation marks are called tokens. Similarly, in a C program, the smallest individual units are known as C tokens has six types of tokens:

Q2. What are the storage classes in C?

Auto: In the language C auto is a keyword for specifying a storage duration. When you create an auto variable it has an “automatic storage duration”. We call these objects “local variables”. Auto variables can be only accessed within the block/function they have been declared and not outside them. In C, all variables in functions are local by default. That’s why the keyword auto is hardly ever used.They are assigned a garbage value by default whenever they are declared.
Example:

The two variables “count” and “count2” have automatic storage duration. In other words, they will exist until the program execution reaches the closing bracket of the block where they were defined. In this case they will exist until we reach the end of the function.While we are on the subject, let’s take another look at “block lifetime” variable:

So an extern variable is nothing but a global variable initialized with a legal value where it is declared in order to be used elsewhere.

The main purpose of using extern variables is that they can be accessed between two different files which are part of a large program.
Few examples:

Analysis: This program is compiled successfully. Here var is declared only. Notice var is never used so no problems.

Analysis: This program throws error in compilation. Because var is declared but not defined anywhere. Essentially, the var isn’t allocated any memory. And the program is trying to change the value to 10 of a variable that doesn’t exist at all.

Analysis: Supposing that somefile.h has the definition of var. This program will be compiled successfully.

Usually few variables which are to be accessed very frequently in a program are declared with the register keyword which improves the running time of the program. An important and interesting point to be noted here is that we cannot obtain the address of a register variable using pointers.

To specify the storage class for a variable, the following syntax is to be followed:

So we can say that they are initialized only once at compile time and exist till the termination of the program. Thus, no new memory is allocated because they are not re-declared. Their scope is local to the function to which they were defined.

Inside a function it makes the variable to retain its value between multiple function calls Global static variables can be accessed anywhere in the program. By default, they are assigned the value 0 by the compiler.

Q3.What is Volatile keyword in C?

Volatile qualifier tells the compiler explicitly that a variable’s value may be changed at any time by some external sources (from outside the program).Example: volatile int date;

When we declare a variable as volatile, the compiler will examine the value of the variable each time it is encountered to see whether any external alteration has changed the value.

Q4. What is the difference between Definition and Declaration in C?

Declaration: When you declare a variable, a function, or even a class all you are doing is saying: there is something with this name, and it has this type. The compiler can then handle most (but not all) uses of that name without needing the full definition of that name. Declaring a value–without defining it–allows you to write code that the compiler can understand without having to put all of the details.Example of declaration:extern int bar;
double f(int, double);

Now the use of extern is creating a declaration of a variable but NOT defining it,it is saying that the storage for the variable is somewhere else.

Definition:Definition declares a variable and causes the storage to be allocated. It means you are telling the compiler where to create the storage for that variable

Q5. What is scope of a variable?

The scope is the region in any program where the defined variable has its existence. It cannot be accessed beyond this scope.The three places where the variables can be declared are:

Formal Parameters: Formal parameters, are treated as local variables with-in a function and they take precedence over global variables.Following is an example–

Q6. Which is better? If-Else or Switch?

Lets discuss advantages of switch over if-else and vice-versa

In above example, both case expressions have the same resultant value 3

When compiler compiles a switch statement, it will inspect each of the case constants and create a “jump table” that it will use for selecting the path of execution depending on the value of the expression. Therefore, if we need to select among a large group of values, a switch statement will run much faster than the equivalent logic coded using a sequence of if-elses. The compiler can do this because it knows that the case constants are all the same type and simply must be compared for equality with the switch expression, while in case of if expressions, the compiler has no such knowledge.

Q7. What is a conditional operator in C?

Q8. What is the difference between break and continue in C?

This program calculates the sum of the maximum of 10 numbers. It’s because, when the user enters negative number, the break statement is executed and loop is terminated.In C programming, break statement is also used with switch…case statement. continue Statement

In the program, when the user enters positive number, the sum is calculated using sum += number; statement.

A function is a block of code that performs a specific task.

Suppose, a program related to graphics needs to create a circle and color it depending upon the radius and color from the user. You can create two functions to solve this problem:

Dividing the complex problem into small components makes program easy to understand and use.

Types of functions in C programming:

Depending on whether a function is defined by the user or already included in C compilers, there are two types of functions in C programming:

Q10. Difference between Pass by value and Pass by reference in C functions?

Pass by value: Passing an argument by value to a function means that the function will have its own copy of the argument, namely the value of the argument is copied from the caller to the callee. It turns out that modifying that copy will not modify the original argument.

When a called function in turn calls another function a process of chaining occurs.Recursion is a special case of this process, where a function calls itself.

Example of recursion is the evaluation of factorials of given number. The factorial of a number is expressed as a series of repetitive multiplications as shown below :Factorial of n = n(n-1)(n-2)………..1

Factorial can be calculated using recursion as follows:

Q12. Recursion vs. Iteration, Which is better?

Here are some of the points on recursion and iteration

In C++, struct and class are exactly the same things, except for that struct defaults to public visibility and class defaults to private visibility.Some important differences between the C and C++ structures:

In C, we need to use struct to declare a struct variable. In C++, struct is not necessary. For example, let there be a structure for Record. In C, we must use “struct Record” for Record variables. In C++, we need not use struct and using ‘Record‘only would work. Static Members: C structures cannot have static members but is allowed in C++.C program with structure static member

This will generate an error in C but no error in C++.

Data Hiding:C structures do not allow the concept of Data hiding but is permitted in C++ as C++ is an object-oriented language whereas C is not.

Here are the difference between Structure and Union in C:

A pointer is a variable whose value is the address of another variable, i.e., direct address of the memory location. Like any variable or constant, you must declare a pointer before using it to store any variable address.

The general form of a pointer variable declaration is:

Here, type is the pointer’s base type; it must be a valid C data type and var-name is the name of the pointer variable. The asterisk * used to declare a pointer is the same asterisk used for multiplication. However, in this statement the asterisk is being used to designate a variable as a pointer.

Take a look at some of the valid pointer declarations:

The actual data type of the value of all pointers, whether integer, float, character, or otherwise, is the same, a long hexadecimal number that represents a memory address. The only difference between pointers of different data types is the data type of the variable or constant that the pointer points to.

Void pointer: It is a specific pointer type – void * – a pointer that points to some data location in storage, which doesn’t have any specific type. Void refers to the type. Basically the type of data that it points to is can be any. If we assign address of char data type to void pointer it will become char Pointer, if int data type then int pointer and so on. Any pointer type is convertible to a void pointer hence it can point to any value. void pointers cannot be dereferenced. It can however be done using typecasting the void pointer Pointer arithmetic is not possible on pointers of void due to lack of concrete value and thus size.Example:

NULL Pointer:NULL Pointer is a pointer which is pointing to nothing. In case, if we don’t have address to be assigned to a pointer, then we can simply use NULL.

A null pointer stores a defined value, but one that is defined by the environment to not be a valid address for any member or object.

Q17. What are the Similarities and Differences in Arrays vs. Pointers in C?

Similarities between arrays and pointers

1)Array name gives the address of the first element of an array.

3) Array parameters are always passed as pointers, even when we use square brackets.

Q18. Difference between arrays and pointers ?

Program to show that array and pointers are different

2) Assigning any address to an array variable is not allowed

Program to show that array and pointers are different

Q19. Difference between Malloc and Calloc in C.

The name malloc and calloc() are library functions that allocate memory dynamically. It means that memory is allocated during runtime(execution of the program) from heap segment.

Here, ptr is reallocated with size of newsize.
Example:

Dynamically allocated memory created with either calloc() or malloc() doesn’t get freed on its own. You must explicitly use free() to release the space.

This statement frees the space allocated in the memory pointed by ptr.

Q22. How to dynamically allocate 1D and 2D array in C?

1D array can be dynamically allocated as per following

Note : After memory allocation , malloc returns void*, which is a generic pointer that can point to any type of data.

Hence it has to be explicit to the data type we want it to point to.2D array can be dynamically allocated as per following ways:

A simple way is to allocate the memory block of size r*c and access elements using simple pointer arithmetic.

2) Using an array of pointers

3) Using pointer to a pointer

4) Using double pointer and one malloc call for all rows

Hope this article on C Interview Questions is helpful to you. Feel free to comment for suggestions to improve and ask a question!